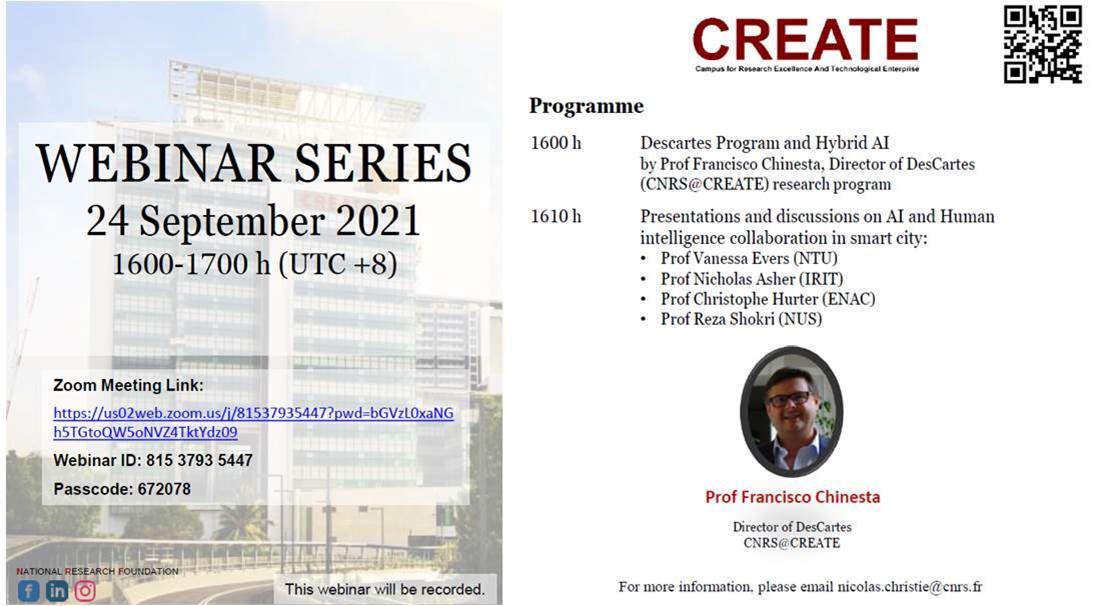 The Centre for Research Excellence and Technological Enterprise (CREATE), an international collaboratory at the National Research Foundation, held a webinar hosted by CNRS@CREATE on 24 September, Friday.
Please find the flyer here and the replay at the end of this article:

About DesCartes Program and Hybrid AI

DesCartes is one of the CNRS’s largest collaborative projects. It concerns the intelligent modelling for decision-making in critical urban systems. One of the main challenges in the people-centric smart city is to develop a new phase in real-time decision-making AI algorithms for critical urban systems. To empower decision-making processes in the very large and very uncertain system of systems environment, extremely accurate modelling methods are needed, which we call intelligent modelling. To answer the limitations of current AI (data availability, responsibility, human-AI interaction, trust), we will develop a hybrid AI that hybridizes Learning, Knowledge and Reasoning methods, with the general ability to reason on knowledge derived from Physics and high-level concepts as well as from low-level patterns in data.

Descartes will develop the disruptive concept of hybrid AI to leap forward, beyond the current black-box procedures used in fully data-driven AI, by integrating meanings and semantics in the following way: First, it embraces “analog” and “digital” worlds, combining physics knowledge with AI-based data-driven models. Second, it combines reasoning (if, then…), using high level concepts (e.g. colors, shape…), with the more traditional machine-learning approach. This “hybrid” paradigm enables reducing the need for big data and other resources, in particular to produce intelligent modelling that empowers decision-making technologies, as well as making trustworthy AI easier to achieve, and more generally leads to a responsible Hybrid AI. Last but not least, a key aspect of DesCartes is to bridge Hybrid AI with Humans as observers, players, decision-makers, to realize the people-centric vision of smart cities.

Francisco Chinesta is currently full Professor of computational physics at ENSAM Institute of Technology (Paris, France), Honorary Fellow of the “Institut Universitaire de France” – IUF- and Fellow of the Spanish Royal Academy of Engineering. He is the president of the ESI Group scientific committee and director of its scientific department. Since 2013 he is ESI Group chair professor on advanced modeling and simulation of materials, structures, processes and systems. He received many scientific awards and distinctions.

Vanessa Evers is a Professor of Socially Intelligent Systems at the School of Computer Science and Engineering and she is the Founding Director of NTU Institute of Science and Technology for Humanity (NISTH). She established to study the impact of technology on human society, and to bring industry, government and academia together to find ways to enhance the use of technology for the betterment of humanity. In addition, she is a chair and Professor of Human Media Interaction, University of Twente, the Netherlands. She is also the Scientific Director and founder of the DesignLab in the Netherlands, a centre for multidisciplinary projects with societal impact based on ‘Science to Design for Society’.

Nicolas Asher is a Directeur de Recherche for the Centre National de Recherche Scientifique (CNRS) at the Institut de Recherche en Informatique de Toulouse (IRIT) lab, where he is a member of the MELODI group. He works on formal semantics and pragmatics, discourse structure and lexical semantics. He received the Silver Medal from the CNRS in 2019.  He is also the scientific director of the Artificial and Natural Intelligence Toulouse Institute (ANITI) since 2019.   ANITI is one of four national interdisciplinary AI institutes in France.

Christophe Hurter is a Professor at the University of Toulouse, France, leading the Interactive Data Visualization group (DataVis) of the French Civil Aviation University (ENAC). His research covers big data manipulation and visualization, immersive analytics, explainable AI and human computer interaction. He investigates the design of scalable visual interfaces and the development of pixel-based techniques.

Reza Shokri is a NUS Presidential Young Professor of Computer Science. His research focuses on data privacy and trustworthy machine learning. He is a recipient of the IEEE Security and Privacy (S&P) Test-of-Time Award 2021, for his paper on quantifying location privacy. He received the Caspar Bowden Award for Outstanding Research in Privacy Enhancing Technologies in 2018, for his work on analyzing the privacy risks of machine learning models.